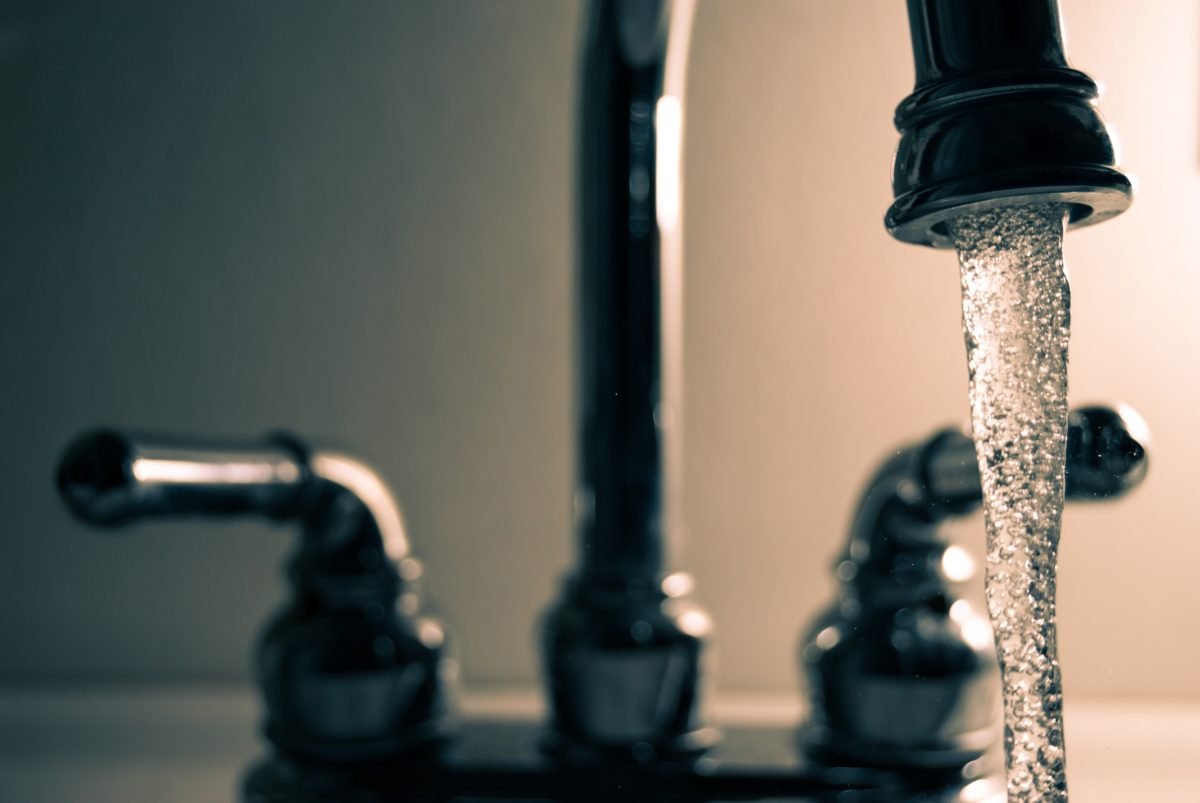 We’ve been in the water heater tank maintenance and replacement business for a lot of years, and yet there are still some jobs that surprise us.

We went on what we thought was a typical call. A water heater wasn’t working properly, so we made a service call to determine the problem. In many instances, it’s because a water heater’s life expectancy is only 10-15 years, and when it’s on the older side of that range, it’s probably time to consider replacement.

The new homeowner said that the water heater had already been there when she moved in, but according to the paperwork from the sale, it wasn’t quite 10 years old and it was a pretty heavy-duty brand. We didn’t automatically assume that she’d need a new one, but just to be on the safe side, we loaded a replacement into our truck before we made the call.

When we got there and took a close look at what was happening – we drained the tank a little and noticed a great deal of brackish water coming from the spigot – we realized that she was probably in need of that brand-new water heater after all.

In most cases, a water heater replacement is a matter of draining the old one, pulling it out and then dropping in the new one. It’s simply a part of the job, and usually a very textbook installation.

Everything was going along as planned – we’d turned off the gas and disconnected all of the plumbing – until we realized the doorway width was smaller than the tank’s circumference. How were we going to get the old water heater out of the mechanical room? It must’ve been built around the tank!

Knocking down a wall wasn’t an option, so we had to get creative. And that creativity involved cutting the water heater into smaller pieces that would fit through the doorway.

What guy doesn’t like breaking out the heavy-duty power tools? As much as we wanted to use the SawzAll, a reciprocating saw that will slice through almost anything like butter, we had to be smart about where we cut the water heater to minimize mess and keep the destruction to a minimum.

Instead of the giant saw, we chose a smaller, handheld metal cutter and carefully cut around the bottom of the tank. It was a strategic location that housed both the anodes (heating elements that heat the water) and a lot of the valves that allow water in and out of the tank.

After cutting midway through the tank, our safety glasses firmly in place (thankfully with all of those sparks flying) and that shrill metal-on-metal sound piercing through our ear protection, we realized we may be able to shorten the time and see more of where we cut if we removed part of the outer shell first, and then cut through the anodes.

As the light hit the inside of the water heater, we could see the green lime-scale build-up from years of hard water running through the tank. The rust that poured out of the bottom also showed us that it had been a long time since the tank had been drained and then refilled. The anode rods themselves were

original to the tank. They’d never been swapped out. The more corrosion we revealed, the more amazed we were that this tank had lasted as long as it did. 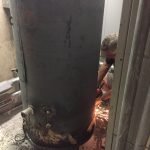 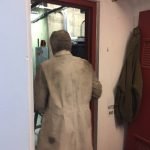 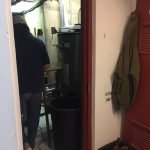 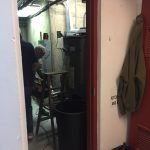 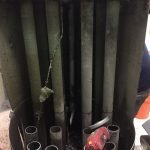 It was a painstaking process, but one that had to be done. Eventually, we cut the tank into smaller pieces and moved them out to make room for the brand-new water heater.

With the old water heater out of the way, we installed the new one and left the homeowner with some tips on how she could prolong the life of her new, high-efficiency water heater:

a. Turn the tank’s electricity or gas off first. Then turn off the water supply to the tank.
b. Let the water in the tank cool for about an hour, and then drain the tank until it’s empty. It’s a good idea to use a screened drain for this, as rust particles and other sediment can collect and form larger particles that can clog smaller pipes.
c. Turn the water supply back on and refill the tank about half way. Drain it again to remove any lingering sediment.
d. Refill the tank.
e. Turn the gas or electricity to the tank back on.
f. You may want to consider investing in a water conditioner that will help soften hard water. You’ll get a number of benefits in addition to preserving your water heater.

a. A lower temperature helps preserve the life of your tank, saves on your energy costs and helps prevent scalding accidents.

b. Keep it at 120 or higher to prevent mold and bacterial growth.

c. Use the “Vacation Setting” when you leave for an extended visit. The pilot light stays lit but the water won’t heat. You’ll save money on energy.

Although there wasn’t anything textbook about this water heater installation, we made sure the job was done right. Also, the new tank fits through the doorway. We made sure of that. 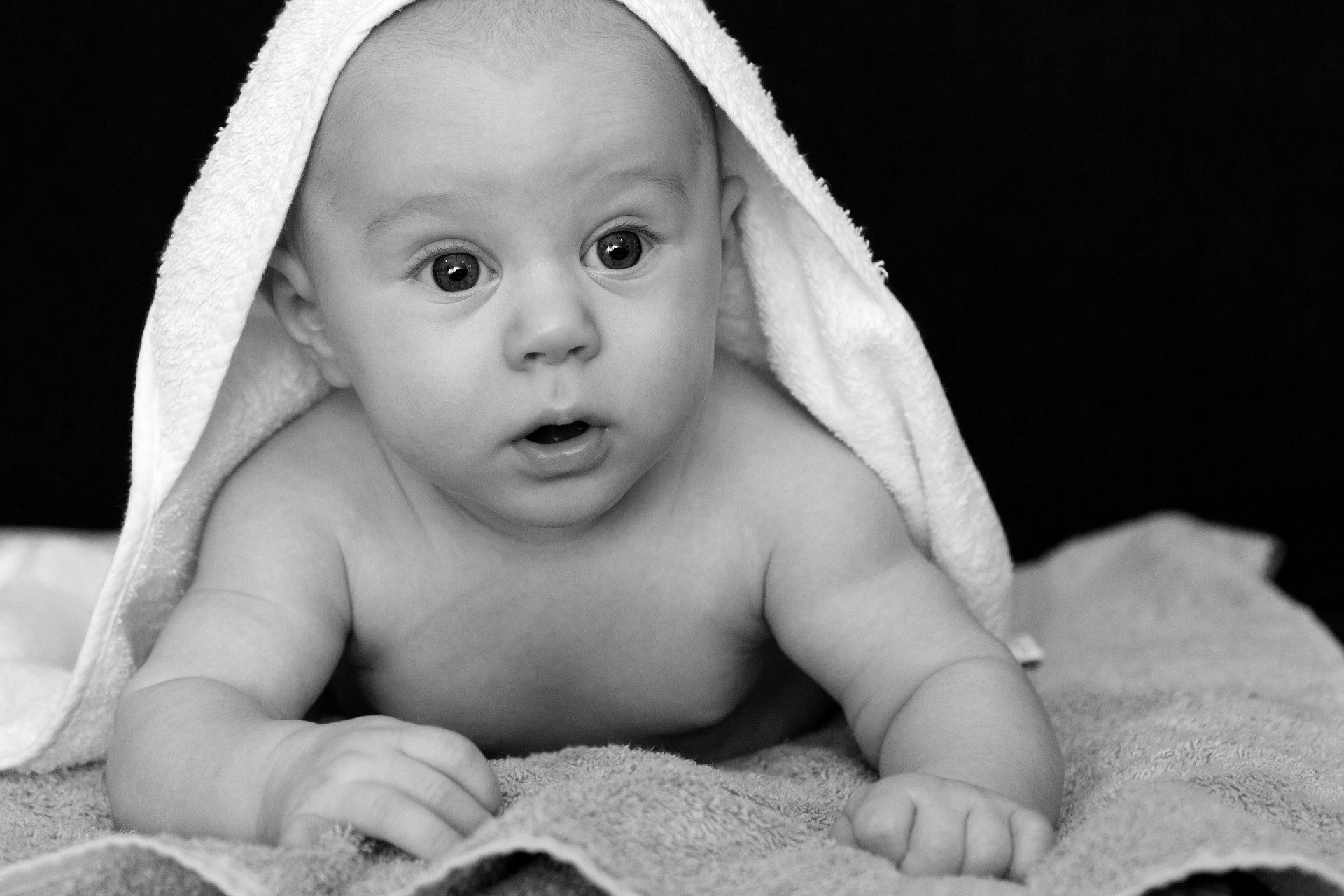 Water Heater Recall Notice – Find out if you are at risk?

The U.S. Consumer Product Safety Commission is recalling more than 616,000 of its natural and propane gas-powered water heaters made by A. O. Smith.

The recall is due to a fire hazard risk when the units are installed on a wood or combustible surface.

To see if you are at risk, check to see if your water heater has the first four digit serial numbers between 1115 and 1631. (They represent the year and week of production.) The serial number can be found on a rating plate located near the bottom of the heater’s outer jacket.

If you believe you have a water heater included in the recall:

If you are not sure or need help, Give us a call! We’re here to help!

Be sure to visually inspect your water heater. Check all the seams, panels, pipes, and valves for any signs of moisture, rust or corrosion. Any type of leak small or large can have disastrous effects.

If you do see anything out of the ordinary call a plumber to have it checked further.

There was a leak that caused the element to short out which started a fire.