The Plumber Who Saved Christmas

Plumbing isn’t for the faint of heart. Or amateurs.

( The following is a true story that happened to our friend and content writer: Lisa Butcher)

For three days, we’d wandered around our 110-year old house, trying to find the source of that distinctive sewer smell. It was so strong it made our eyes water. All we wanted to do was get rid of it! We wracked our brains: Maybe the basement drains were too dry and let gas into the house? Maybe the master cleanout needed to be re-snaked? Maybe the main stack was clogged?

A couple of gallons of bleach poured into all of the drains, a re-caulked floor drain, a call to the drain guy who snakes our cleanout valve twice a year, and a call to the stack guy who cleans out the breather valve on our roof, but to no avail. Where was that smell coming from?

It was the day before Christmas and all through the house, we were gagging on air with the windows pushed out. Holy moly, we had to do something. The whole family was coming into town and we expected a houseful of people in less than 24 hours. Did we have to tell them not to come? That we had a house emergency?

We called in the expert: a certified plumber. 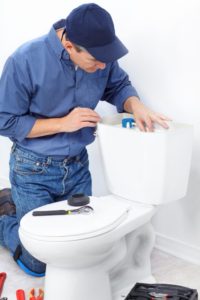 Our plumber re-snaked the drains, re-checked the air flow in the roof stack and then checked one last thing: the toilet. The toilet is on the second floor. What would happen with a toilet? It flushed fine, most of the time. Sometimes, we had to flush it twice, but other than that, we didn’t notice anything untoward. The plumber insisted, thinking maybe some of those baby wipes were stuck in the works.

By the way, even if those baby wipes say they’re flushable, they’re not. They can get tangled in sewage systems and shut down part of the waste water system for days.

But we didn’t have a baby, we assured him. We didn’t use baby wipes. Even so, he was pretty adamant. He was pulling the toilet. If it was nothing, well, at least we’d know for sure.

After he turned off the water supply, emptied both the tank and bowl, he pulled the toilet out and stared down the sewer pipe. Sure enough, it was blocked, but not by baby wipes or too much toilet paper. There were tree roots in the sewer pipe of a second-story toilet.

Even the plumber was surprised. A second floor was usually well beyond the reach for tree roots. And yet there they were, blocking the draw on the toilet, causing sewer gas to leak from the base of the toilet, down the stairs and into the main rooms of the house.

Our house had been vacant for a couple of years before we took residency. And we’d had a couple of years where the rains were nearly nonexistent. When it was dry, the neighboring trees searched for the best water source they could find: standing water from the toilet in our house.

The plumber snaked the toilet lines just like he would a cleanout valve. Once he was sure the lines were clear, he reset the toilet, turned the water back on and cleaned everything up neatly.

Honestly, we never would’ve imagined tree roots in a second-floor bath. But when you call in an expert, you get the answers and the solutions you need without a lot of wasted time and money.

Christmas went off without a hitch. And our plumber is on our Christmas card list from now on.