Theft of Large Amounts of Copper Wire in Northern Arizona 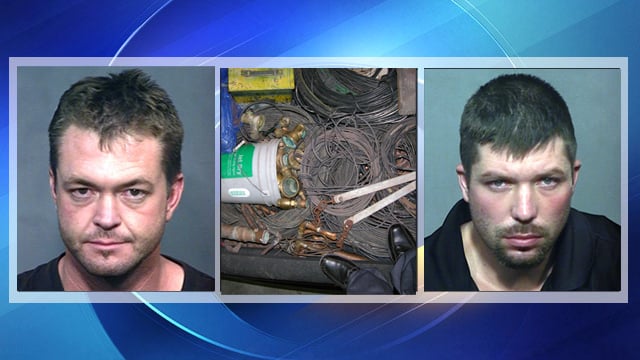 FLAGSTAFF, AZ (KPHO) –
Two Valley men are in custody in connection with the thefts of large quantities of copper wire and products in northern Arizona.

Coconino
County sheriff’s deputies say over the past two weeks, they have responded to numerous burglary calls for the theft of copper wire. One of the more significant thefts occurred at the Parks rest area off of eastbound Interstate Highway 40. The rest spot has been closed to public use for more than 18 months.

Detectives
launched an investigation that revealed the men allegedly entered and vandalized  buildings at the rest area. The men are accused of damaging drywall and existing plumbing to remove large quantities of copper piping. Thirty-three electrical boxes at the rest stop were also vandalized and hundreds of feet of cooper wiring were taken, sheriff’s deputies said.

A search warrant on Riddle’s truck was obtained and it led to the recovery of more than 50 individually rolled spools of copper wire of varying lengths and numerous five gallon buckets full of brass pipe fittings that appeared to have been cut with a power tool. Detectives also recovered several battery-operated power tools that are believed to have been used during  crimes and large amounts of copper piping that are similar to the piping taken from the rest area.